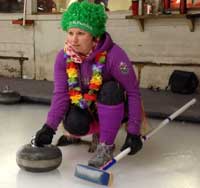 Once upon a time…

Not so very long ago, in my old environment, the meaning of “to curl” was to twist locks of hair into ringlets or coils, or to “curl” up with a good book! In Canada the meaning of to “curl” is sliding granite rocks along an ice lane aiming at a circular target under the ice. This very popular and competitive game claimed by Canadians, originated in Scotland, and was brought over by Scots immigrants.

Along with Hockey, Curling often shares prime time television, and has a huge following. As with all games from a spectator’s point of view, it is easy! It is a cross between Lawn Bowling, and billiards, only on ice. Sliding along the ice with ease and grace, one lets the rock slip from the hand toward the target. Fellow team members, on your commands of hurry hard, or is it have a heart, brush in front of the rock to aid its passage.

I received a phone call late one evening the voice which I did not recognize said “We are looking for a fourth member to join our team and though of you, we would like you on our team tomorrow at the local bon spiel.” I thought it would be fun I am game for most things. I explained I had never curled before but that was not a deterrent, I later found out I was a last resort and they were so desperate to form a team.

At the Alexander Rink I met the rest of the team. Jeff, said “Nice to see a new face, come to throw some rocks have you, eh?” Throw? They weigh 28lbs, the weight of a parcel of Sugar. I was seriously wondering if I could lift one or project it down the ice, the thought of throwing did not cross my mind. I was kitted out with the required equipment for the game, consisted of a slip sole for my left shoe, and a broom.

Teams took to their lanes, and I am sure that’s not what they are called but for now to me they are lanes. Much like ten-pin bowling without the pins, or skittles without the skittles. Men were walking on the ice like it was terra firma; I took it steady then Jeff said I should put on the slip shoe. I had purposely made the effort to wear shoes with plenty of grip, now I was to place a slip shoe on to help slide, as I projected the rock to the bull’s- eye.

Let the games commence. Every one shook hands in a gentlemanly fashion and wished each other good curling. I watched as the first player launched himself from the Hack. That is like a runner’s starting block, which one’s foot rests upon prior to hurling him and the stone forward, assisted by the broom for balance. As the slide begins he aims the stone at a point marked by a broom at the other end by his teammate, releasing the stone with an inner or outer curl before reaching the Hog line.

Looks and sounds simple, and with some coaching I was shown how to set my foot, position my body, balance on the broom, and twist the stone. My left leg bent in front of me with most of my body weight placed on my knee, and right foot in the hack. I looked down the ice. This was the moment, my first curl. I pushed off with my right foot, sliding forward at an angle, letting go of the stone, and spinning around. Hey not bad for a first try especially as my stone stopped on the target! 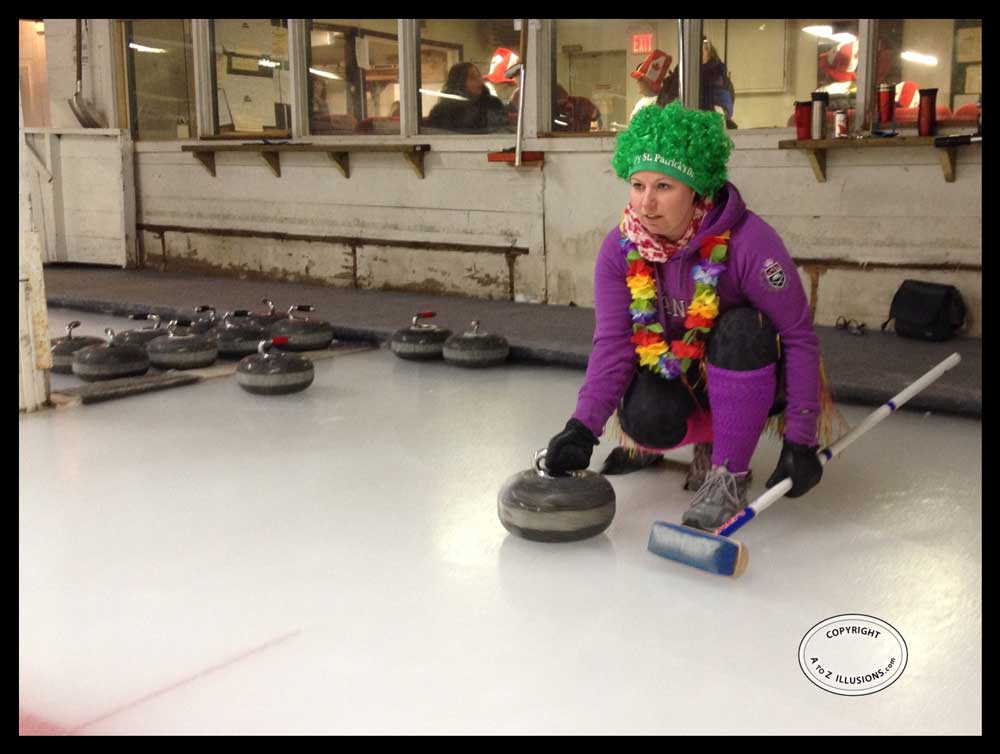 On my second try Cody pushing a stone toward me, and offering advice as to where I had gone wrong. Maybe I should have shouted “Fore” or something! The second time I balanced tried to bear in mind all that had been said and lunched myself forward all of 5 feet before letting go the stone with a right twist. This time I was a little more graceful ending by sliding on both knees, but rock went way past the circle and out of play After a few more attempts I was able to stay upright and avoid knocking my knees and able to judge the right weight in the throw.

The next challenge was to sweep. As the stone nears the target in order to help it travel further and change direction, one brushes the ice in front of the stone reducing friction. Sweeping is one thing, sweeping and sliding alongside the stone a totally different game. I did ok on my first few tries and stayed upright. Sweeping helps one to keep warm, the temperature in the rink was below freezing

A total of eight ends were played, and declared a draw, after which there was a debriefing session and some refreshments! During which time the ice was re flooded and prepared for the following nights games, a thousand gallons of water amounts to six thousand pounds of ice. As with all games there is etiquette and rules to the game, and in this relaxed environment not strictly adhered too everyone is having fun.

What did I learn from this?

They make Ice too slippery.

Slide and glide is not as easy as it looks.

1,000 gallons of water makes for lots of ice cubes.

A Hack is a starting block, not a newspaper reporter.

A curl is more than a lock of hair.

Curling montage with A to Z Illusions 2014

This site uses Akismet to reduce spam. Learn how your comment data is processed.

What’s In the Blog Now?